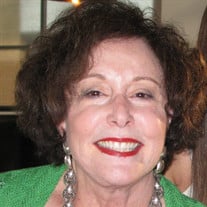 Ellen Ruth Nagler Kusin (80) passed away unexpectedly but peacefully on May 1, 2019 in Houston, Texas. She was born on May 15, 1938 in Vancouver, B.C. to Samuel and Victoria Nagler. In 1959 during a trip to San Francisco, Ellen met Sherman Allen Kusin of Texarkana, Texas. Six weeks later they were engaged to be married. Broke and hoping to build a better future together, Ellen moved with Sherman to Austin, Texas where he attended The University of Texas Law School. In Austin, Ellen felt at home. Her outgoing, friendly, and somewhat unconventional personality fit right in with Austin’s alternative vibe. After Sherman’s graduation, the family moved back to Texarkana. Although Ellen had a bit of culture shock transitioning from British Columbia to her new life in Texarkana, Ellen embraced her new home with grace, enthusiasm, and her ever-present sharp wit. For the next 30 years, Ellen made her mark in Texarkana while raising her three children. She became deeply involved in the community and obtained undergraduate and graduate degrees at East Texas State University at Texarkana which allowed her to cultivate a successful counseling practice. After becoming empty nesters, Ellen and Sherman retired to Austin. Ellen quickly became integrated into the Austin community where she made friends wherever she went. She took advantage of the arts and fine dining scene, and often gave piano performances that showed off the classical music lineage that was passed down from her concert pianist mother. She and Sherman were part of the group that founded Temple Beth Shalom. She was also an active member of both the Anti-Defamation League and Planned Parenthood. Ellen loved to throw a good party and make new friends. In the process, Ellen captured everyone’s attention with her beauty, humor and wit. Up until the end, Ellen kept up with her friends from Vancouver, Texarkana and Austin, all of whom she held dear to her heart. Ellen also loved traveling the world with her husband Sherman. She had especially fond memories from a trip to Vietnam and Myanmar, where they learned about a little known culture and sampled the local fare. Ellen is preceded in death by her husband of 56 years, Sherman. She is survived by her sister Jane Cherry and brother Henry Nagler. She is also survived by her son Stuart and daughter-in-law Jana, her son Robert and daughter-in-law Angela, and daughter Joelle Kusin Miller and son-in-law Aaron. In addition, she is survived by her grandchildren Rachel Daniller-Varghese and her husband Drew, Sam Kusin, Gayla Kusin, Max Kusin, Lane Miller, Allie Miller, and several nieces and nephews whom she adored. Funeral services for Ellen will be on Sunday, May 5th at 1:00 PM at Austin Memorial Park located at 2800 Hancock Drive Austin, Texas 78731. There will be a reception immediately following the graveside service at Temple Beth Shalom at 7300 Hart Lane, Austin, Texas 78731 The family requests that any donations in honor of Ellen be made to Austin Speech Labs, Planned Parenthood, or Temple Beth Shalom in Austin.

Ellen Ruth Nagler Kusin (80) passed away unexpectedly but peacefully on May 1, 2019 in Houston, Texas. She was born on May 15, 1938 in Vancouver, B.C. to Samuel and Victoria Nagler. In 1959 during a trip to San Francisco, Ellen met Sherman... View Obituary & Service Information

The family of Ellen Ruth Nagler Kusin created this Life Tributes page to make it easy to share your memories.