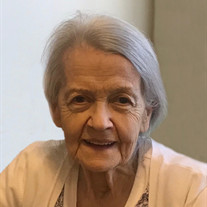 Elizabeth Holmes, 81, of Cedar Park, Texas, passed away on March 28, 2021, with her children and grandchildren surrounding her with love, music, and readings during her last day on this earth. Born in 1940 in Illinois, the firstborn of Merrill W. and Henrietta E. Holmes, Ms. Holmes first attended primary school in a one-room schoolhouse on the farm before graduating from Bradford High School in 1958 as a valedictorian. She majored in English and Speech at Illinois Wesleyan University, where she graduated in 1962 as a salutatorian. Ms. Holmes was a member of the Phi Kappa Phi honor society. She took graduate-level coursework in Library Science at The University of Chicago and The University of Texas before earning a Master of Library and Information Science degree from the University of Rhode Island in 1986. Ms. Holmes once said in a newspaper interview in 1988 while working as the children's librarian in Milford, NH, "I grew up on a farm in Illinois and spent hours in the linden tree where I could sit and read. I read 'Tom Sawyer,' 'Pollyanna.' If I went inside, I was put to work. By disappearing, up in the tree, I had a private place." What her interviewer notes next is something those of us who have had the privilege of hearing Ms. Holmes tell a story immediately recognize, "her eyes widen, her face lights and it's not at all difficult to imagine the dreamy little girl sitting in the linden tree on the Illinois farm." Ms. Holmes worked as a high school English teacher in Illinois, taught courses at the graduate level in New Hampshire, owned her own bookstore (Serendipity Book Service) in Texas, and worked as a librarian in school, college, special and public libraries for over four decades in Illinois, Texas, New Hampshire, and Maine. One of her greatest joys was bringing words alive as a storyteller wherever she lived, including Belize and England. She also enjoyed writing and published haiku poetry. Ms. Holmes was also an avid writer of letters and corresponded regularly with family and friends, often including a carefully and perceptively chosen card, as well as clippings of articles that connected with something going on in the recipient's life. She and her first cousin Anne (Foster) Nott grew up together and remained good friends and correspondents throughout life. As a young mother, she shared her love of words and her passion for books and storytelling with her three children. She created traditions that focused on caring for one another and creating shared experiences. For example, as an alternative gift-giving idea one year, she encouraged her children to write a note saying something fun they would do with their brother or sister and then deliver it in a tiny rectangular matchbox to their sibling. She also created a ½ birthday tradition, a celebratory ritual that has continued in the next generation. She valued one-on-one time with each of her children, especially out in nature, often delighting in whatever tiny leaf or small thing they would discover during their walk. She had a talent for seeing every child as an individual. For example, she encouraged each of her children to choose a spot in the backyard as their own "homestead." After a divorce from her children's father in 1978 and throughout her journey to find health and to realize her passion for bringing children and literature together, she stayed connected with her three children and five grandchildren through calls, gifting of books, and visits together. Ms. Holmes returned to Texas in 2002 to be nearer to her children and grandchildren. Ms. Holmes is survived by her son, Mark (Nancy) and their children Connor and Katherine of Texas; twin daughter, Amy (Mitch) and their children David and Natalie of Georgia; twin daughter, Sarah (Bill) and their daughter Emily of Texas; and brother, James "Jim" (Michelle) Holmes of Florida. She is also survived by the father of her children, Warren. She was preceded in death by her parents, Merrill W. Holmes (2004), Henrietta Holmes (1999), sister Carole Y. Holmes (1979), and sister-in-law Esterida Holmes (1981). Honoring her wishes, her children will scatter Ms. Holmes's ashes in nature. Therefore, there will not be a burial at Putnam Cemetery, Putnam, Illinois, but her children will place a memorial stone in the family's plot in Ms. Holmes's memory. A memorial service, including an online option for those unable to travel, will be held later. The family will post details on Ms. Holmes's tribute page at Austin Natural Funerals. Per Ms. Holmes's request, should friends desire, they may send memorial contributions to the Alliance for Childhood, P.O. Box 5758, Annapolis, MD 21403, (202) 643-8242 https://allianceforchildhood.org

Elizabeth Holmes, 81, of Cedar Park, Texas, passed away on March 28, 2021, with her children and grandchildren surrounding her with love, music, and readings during her last day on this earth. Born in 1940 in Illinois, the firstborn of Merrill... View Obituary & Service Information

The family of Elizabeth Holmes created this Life Tributes page to make it easy to share your memories.

Elizabeth Holmes, 81, of Cedar Park, Texas, passed away on March...