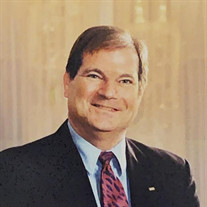 Edward Lincoln Osofsky was a beloved husband, father, grandfather, brother, uncle, and friend. He was born on February 12, 1943 in Brooklyn, NY. Ed grew up in Brooklyn and Jackson Heights with his sister Barbara and his parents Max and Eleanor. He met the love of his life, Evalyn, at Surprise Lake Summer Camp where Ed was a lifeguard and Evy was a camp counselor. They were married in 1966. Ed spent a few years as a teacher in New York before moving his family to Dallas in 1970. There he began a long term career in fundraising development for a variety of non-profits. Ed worked at St. Paul Hospital in Dallas, Presbyterian Hospital in Dallas, The Dallas Arboretum, Spohn Hospital in Corpus Christi, and Bethesda Hospitals of Cincinnati. Ed also started his own fundraising consultant firm in Dallas - an innovative idea for those days. As an expert event planner, Ed organized golf tournaments and created a brand new fundraising event that included keynote speakers beginning with Henry Kissinger. Other speakers at these successful events include: Margaret Thatcher, Walter Cronkite, Jean Fitzpatrick, James Baker, George Bush Sr., Colin Powell, James Carville & Mary Matalin. Ed was a strong leader and a dedicated member of the Jewish community. During his time in Dallas he proudly served in the Temple Emanuel Brotherhood. He was an active member of the brotherhood and even served as Brotherhood President. As a member of Congregation Beth Israel in Corpus Christi, Ed also served as the President of the Temple. Ed was a proud father of four daughters. He loved telling people about his four daughters! He so loved to be with his children and grandchildren, who lovingly referred to him as Zayda and Za. He loved his family with all his heart! Ed also loved his two little dogs, Mitzi and Lulu, and he never tired of cuddling with them. An avid history buff, Ed enjoyed learning about historical events through books, films, and trips. He loved to travel to new places. Ed enjoyed taking his family on road trips, and later in life, going on trips with his wife. Ed is survived by his wife of fifty three years Evy, and his four daughters and their spouses Shari (Tim Sasser), Marni (Lori Nyquist), Dori (Joseph Flores), and Julie (Matthew McCandless), his precious grandchildren Melanie (Tim), Timmy (Kayla), Haylee, and Scout, his sister Barbara and brother in law Jerry Levy, his nieces Judy and Debbie, and his nephew Robbie. In lieu of flowers, the family is asking for support for the camp where Evy and Ed met, JCC Camp Surprise Lake (https://surpriselake.org/ways-to-give). Beginning Sunday 8.11 through Tuesday 8.13 from 6:30pm-8pm, the family will observe Shiva at the Osofsky home (705 Yale Drive Pflugerville, TX 78660).

Edward Lincoln Osofsky was a beloved husband, father, grandfather, brother, uncle, and friend. He was born on February 12, 1943 in Brooklyn, NY. Ed grew up in Brooklyn and Jackson Heights with his sister Barbara and his parents Max and Eleanor. He... View Obituary & Service Information

The family of Ed Osofsky created this Life Tributes page to make it easy to share your memories.