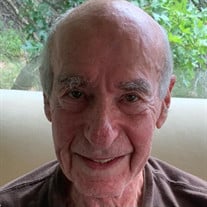 Edward Howard Lilly of Austin, Texas, passed away on the morning of Friday, May 28, 2021. He was born and raised in Malden, a suburb of Boston, Massachusets on November 12, 1935, the oldest son of Saul Lilly and Anne Schwartz Lilly. He graduated from Malden High School and attended college at several universities, including Harvard, Yeshiva University, and Boston University, graduating with a Bachelor of Science in Physics. He followed his family from the Boston area to Houston, Texas. Throughout his early working years he worked many odd jobs to contribute to the family including taxi driver, butcher, and window cleaner. He began his professional career as an engineer in Houston at Shell Oil, Service Bureau Corporation, and then IBM in Houston. True to the nickname of I’ve Been Moved, IBM sent him to Yorktown Heights, NY; Mendham, NJ; Kwajalein, Marshall Islands; Gaithersburg, MD; and finally Austin, TX, where the family settled in 1978. He worked on many important projects, including the Spartan Anti-Ballistic Missle, the Trident Submarine, the IBM 5520 Administrative System, the IBM Displaywriter Word Processor, and Lotus Notes. He was well respected for both his technical knowledge and his people management style. He met his wife, Linda Diamond, in November 1961 at The Reveliers, a Jewish singles party. He got her phone number, left, and called her later for a date. She didn’t remember him from the party, but agreed to the date. When he arrived at her door, she thought he was nice looking. They went to dinner and a movie, Breakfast at Tiffany’s. Their love grew quickly, and they were engaged in February 1962 and married in June of that same year. They would have celebrated their 59th wedding anniversary this year. He was a devoted husband, father, and grandfather. Nothing mattered more to him than his family. He had a brilliant mind and a hunger for knowledge. He was a better resource than Google. He was a voracious reader and student of history. He loved the Boston Red Sox and the Boston Celtics. He loved ice cream and popcorn. He loved travel and adventure with Linda, vacationing all over the US and Europe. Ed was an active member of the Jewish community, having served as treasurer and co-president with Linda of Congregation Agudas Achim. He is survived by his wife, Linda Lilly, as well as his children Pamela Tobias (Jeff), Jeffrey Lilly (Amy), his grandchildren Anna Kate Cooper and Miles Lilly, and brother Stephen Lilly (Pat). In lieu of flowers, memorial contributions may be made to St. Jude Children’s Research Hospital, the American Stroke Foundation, or The American Cancer Society.

Edward Howard Lilly of Austin, Texas, passed away on the morning of Friday, May 28, 2021. He was born and raised in Malden, a suburb of Boston, Massachusets on November 12, 1935, the oldest son of Saul Lilly and Anne Schwartz Lilly. He graduated... View Obituary & Service Information

The family of Edward Howard Lilly created this Life Tributes page to make it easy to share your memories.

Edward Howard Lilly of Austin, Texas, passed away on the morning...