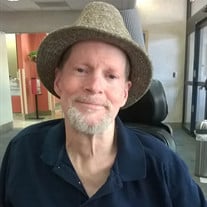 Douglas Edward Tabony was born in Houston on 8/13/1951 and passed away peacefully at his home in Austin on 6/30/2021. As a young man, Doug played violin and traveled the world, first with the Houston All City Orchestra and then with the Rice University Chamber Orchestra. In 1972, he married Laura Jo Goldsmith and transferred to the University of Texas, where he earned an MA in music theory and a Master's Degree in music performance studying with Leonard Posner. Doug played in, and eventually also served as personnel manager of, the Austin Symphony Orchestra and the Austin Lyric Opera. He played in many regional Texas orchestras; did freelance work with quartets and a pianist, as a soloist, as backup strings, and as a music contractor. He had numerous students through the years and several day jobs including typing, woodworking, and bow rehairing. Doug also learned to play other styles of music and participated in the Austin music scene in a progressive country band, Paradise Special; a string band with original songs written by John Clay, The Lost Austin Band; a swing jazz band, Jazz Me Blues; and a quartet with arrangements by Will Taylor, Joy String. Doug loved to travel. He made many trips with his family and with his extended family. Laura's parents, Lucy and Lane, provided the opportunity for international travel to England, the Continent, Ireland, Scotland, Canada, Mexico, and New Zealand as well as many vacations in the US. Lane usually traveled with a guitar and Doug with a violin and they shared their talent internationally at open mikes and in pubs. Doug loved bicycling as much as playing music. He rode often with the Austin Cycling Association, did a little racing with Violet Crown, and continued to participate in group rides with his racing buddies. In 2000, he had a bicycle accident and suffered paralysis as a partial quadriplegic. Doug loved nature. In 1997, he moved to Castlewood Forest neighborhood which has many old oak trees providing shade and wildlife habitat. Soon after his bicycle accident, he began an approximately 15-year tenure as the COVNA newsletter editor; started a neighborhood web page and a neighborhood email group. He created neighborhood guides for birds and butterflies he had seen. Doug collected classical music performances from the 30's and 40's and older jazz, many of which he published on his YouTube channel, 2ndviolinist, which also includes his master's violin recital and performances of friends including and 2 of the bands he played in, the Lost Austin Band and Jazz Me Blues. He spent many happy hours observing birds and other wildlife in his backyard sanctuary. Doug, loving husband and father, is preceded in death by his parents, Joseph Henry Tabony and Ola Lee Stulting Tabony. He is survived by his wife Laura Jo Goldsmith Tabony; his sons Charles Joseph Tabony and wife Crystal and Alan O'Neil Tabony; and his brothers Robert Henry Tabony and wife Jackie, Joseph Lawrence Tabony and wife Ann; and Charles Francis Tabony and wife Peggy. In lieu of flowers, we would appreciate memorial donations to the Audubon Society, Nature Conservancy, or other organizations that support wildlife, habitat, or combat global warming. A visitation will be held on Saturday, July 3, 2021 from 4:00 p.m. until 6:00 p.m. at Austin Natural Funerals. Doug will be laid to rest on Sunday, July 4, 2021 at 11:00 a.m. at Eloise Woods Natural Burial Park.

Douglas Edward Tabony was born in Houston on 8/13/1951 and passed away peacefully at his home in Austin on 6/30/2021. As a young man, Doug played violin and traveled the world, first with the Houston All City Orchestra and then with the Rice... View Obituary & Service Information

The family of Douglas Edward Tabony created this Life Tributes page to make it easy to share your memories.