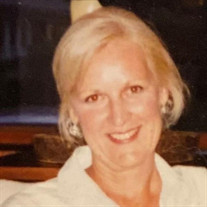 Donna was born in Cleveland, Ohio, on October 10, 1942. She passed at her memory care home in Buda, TX on February 24, 2022, at 4:30pm In 1965, Donna flew the Ohio coop as a young woman and landed in West Palm Beach to work in Stouffer’s restaurant and hotel management program. The new boss told her to avoid two local men, and one was Bob Aumiller. Wouldn’t you know that led her to immediately start dating Bob, a recently divorced retired Army Lt. Colonel. They swiftly got married, moved to the DC area, and had their only child, daughter, Kari, in 1967. They then settled in Cincinnati with good friends and neighbors, but in 1972, Bob was lured to Conroe, Texas, to start building homes with his architect brother. There, Donna started interior design and earned her ASID degree online and Bob built her a showroom/ offices and warehouse on HWY 105. Her business “Interior Concepts” took off—so much so— that Bob ended up leaving the building business and worked for her. In 1981, Bob unexpectedly died while running Donna’s business errands. Kari encouraged her to move to Austin in 1989 to be in the best town in Texas. From there Donna met new friends, worked in Interior Design and other shops around town, had a space at Whit Hanks selling Mexican imported vintage pieces, and joined the Church at Glad Tidings. She found love again and married Charles Clark in May 2007. They moved to El Paso that year, sold the Newfield Lane home, and started a new life together. Sadly, that would be when the dementia symptoms began for Donna, and she would start her slow 15-year decline with that disease. She was a soft-spoken delight to everyone—even in her final years. Always calm, she never spoke badly about people or showed anger. Her sense of humor was keen, yet subtle. She was always ready to get up and dance, have a drink, yet was deeply connected to God, engaged in church, and choir. She will always be missed by those who knew and loved her. A small, family, burial ceremony will be at the special, Eloise Wood Nature Burial Park on Monday, Feb 28, 2022. For friends, a Celebration of Life will be held at future location & date in Austin, TX.

The family of Donna Lee Fox Aumiller Clark created this Life Tributes page to make it easy to share your memories.