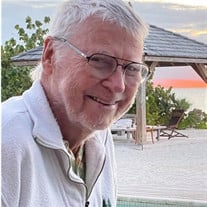 On Friday, September 3rd, 2021, Don Dechman, loving husband and father of three children, passed away at the age of 86. His wife Jonene of 63 years was at his side. Don was born on June 5th, 1935, in Ft. Worth, TX, to Dwight and Marie Dechman. He received his Bachelors and Masters degrees in Chemical Engineering from the University of Texas in Austin in 1958, and enjoyed a 30 year career with Union Carbide. On August 23rd, 1958, he married Alyce Jonene Martin, and they had three sons: David, Ken, and Jim. Don had a passion for math. He was adventurous and eager for learning until his last day, scientifically tracking the movement of the moon, stars and planets and marveling at the hatching of monarch butterflies on his balcony. He loved solving complex math puzzles, playing poker and bridge, and, after weeks of passionate analysis, he was one of the first people to solve the Rubik's Cube. Each morning he produced a family email sharing new destinations for travel or learnings about people and places. He rejoiced in beautiful landscapes and mountains but equally celebrated the construction of new tall buildings in NYC. Don was known for his sharp mind, intellectual curiosity, sense of fairness, and a calm and compassionate manner. Most of all, he loved people, and was always upbeat, with an ever-ready smile. His health had been in decline for a while, with an acceleration in recent weeks, but his upbeat spirit of life and ability to find joy in each day continued until the end. Don set an example for us all in his embrace of his mortality and in making the most of his days in the meantime. Even with his walker, he was the first to make a run for the pool and claim the best float. Don was predeceased by his sister, Janis Modrall. He is survived by his wife Jonene, their three sons and spouses, David (Michel Mercure), Ken (Antonio Favata), and Jim (Johnna Jones), a grandson John Grant Dechman, a brother-in-law (Bill Martin), three nieces (Gayle Modrall, Gretchen Schmetter, and Susan Way), and four bonus grandchildren (Natalie, Anthony, Harrison and Lulu Jones). There will be a private family burial on September 8th.

On Friday, September 3rd, 2021, Don Dechman, loving husband and father of three children, passed away at the age of 86. His wife Jonene of 63 years was at his side. Don was born on June 5th, 1935, in Ft. Worth, TX, to Dwight and Marie Dechman.... View Obituary & Service Information

The family of Donald Arthur Dechman created this Life Tributes page to make it easy to share your memories.