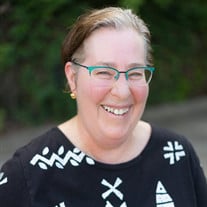 Debra Lou Winegarten was born in Dallas on December 29, 1957 to Ruthe and Alvin Winegarten, and passed from this life on September 10, 2018, the first day of Rosh Hashanah 5779. Debra was an author, publisher, educator, flutist, and all-around rabble-rousing feminist who delighted in inspiring and challenging others. Debra received her undergraduate education at Texas Woman’s University, where she discovered her passion for sociology. Debra appreciated the skill and confidence that came from her experiences at TWU, and she served as president of the Austin TWU Alumni chapter for several years. Debra received her master’s in sociology from The Ohio State University, and taught sociology at the college level, most recently at South University and The Art Institute, both in Austin. Debra also founded Sociosights Press, whose mission is to publish books that “transform society one story at a time,” in accordance with the principles of tikkun olam. Debra reveled in being a Jew in Texas; she found comfort and inspiration in the practice of Judaism, and was a member of Congregation Agudas Achim in Austin. A third-generation Dallasite, Debra’s interest in Jewish history led her to become involved in the Texas Jewish Historical Society, where she took on leadership positions, including a term as president. Debra made a point of visiting Jewish historical sites wherever she traveled, from Cairo, Egypt to Dublin, Ireland and Waco, Texas. Debra authored a number of books, specializing in biography and poetry, and her work garnered many awards. Her titles include “There’s Jews in Texas?,” “Where Jewish Grandmothers Come From,” “Oveta Culp Hobby: Colonel, Cabinet Member, Philanthropist,” “Katherine Stinson: The Flying Schoolgirl,” and, with Zvi Yaniv, “My Life on the Mysterious Island of Nanotechnology.” In June 2018, she was awarded Sarah Patton Stipend for non-fiction at The Writer’s Hotel for her memoir-in-progress. Debra was especially proud of the books she published via Sociosights Press. Among its titles are the award-winning children’s book “Almost a Minyan,” written by Lori S. Kline and illustrated by Susan Simon, and “Faces of the Matriarchs: An Artistic Depiction of Women in Genesis” by Melanie Lewis, which was released while Debra was in hospice. Debra’s journey through illness was marked by courage and grace. Even in the hospital, she was a teacher, demanding best practices and offering feedback so that others might have a better experience. She appreciated every caregiver, and made a practice of thanking those who tended to her body as it failed. She will long be remembered for the many gatherings she had while at St. David’s, including two standing-room-only minyans and a 20th anniversary celebration of her hand-fasting with her wife and heart partner, Cindy Huyser. Debra leaves behind many who have been delighted and inspired by her. She was fond of saying it took three blackboards to draw out her family tree, and her extended family is large. She was predeceased by her mother, Ruthe Winegarten, father Alvin Winegarten, sister Martha Wilson, and stepmother Phyllis Putter, and is survived by her devoted wife, Cindy Huyser, her brother, Marc Sanders, uncle Larry Lewin, and her siblings Susan Picard, Josh Putter, Alan Putter, and David Putter as well as by her cats Orange Julious, Keyboard, and Sheina. At the time of her death, she was employed by the University of Texas, where she identified herself as the “first undersecretary of the American Astronomical Society.” Donations in Debra’s honor may be made to the Ruthe Winegarten Memorial Foundation for Texas Women’s History (https://www.womenintexashistory.org/support/), or to a charity that provides service to pets or to the homeless. Graveside services at noon, Thursday, September 13th in the Agudas Achim Section of Austin Memorial Park Cemetery, 2800 Hancock Dr., Austin, Texas. Online guestbook and obituary available at AustinNaturalFunerals.com. May Debra’s memory be for a blessing.

Debra Lou Winegarten was born in Dallas on December 29, 1957 to Ruthe and Alvin Winegarten, and passed from this life on September 10, 2018, the first day of Rosh Hashanah 5779. Debra was an author, publisher, educator, flutist, and all-around... View Obituary & Service Information

The family of Debra Lou Winegarten created this Life Tributes page to make it easy to share your memories.