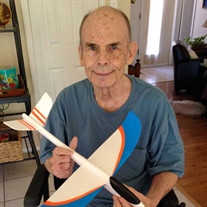 David Richard Groening, a longtime resident of Round Rock Texas, passed away October 10th, 2018, after a long battle with Parkinson’s disease. David was born November 14th, 1940, in Dallas, TX. He attended North Texas State for his undergraduate and graduate degree. His family would like to extend thanks to his many caregivers including the VA home team, Theracare Home Health, and Hospice Austin. David loved flying, often taking friends and family up in his Cessna, and worked at United Airlines for years. He was an extremely intelligent, kind, and friendly person. He will be missed by his wife of 46 years, Cindy Groening, and his children, Holly Walrath (Groening) and Karl Groening. He is survived by his sister Evelyn Peterson, and his brother, Charles Groening his daughter-in-law Jill Groening (Stainthrope), his granddaughter, Tabitha Groening, and his son-in-law, James Walrath. He is proceeded in death by his parents, Carl Charles Groening and Lessie Mae Wines, and his sister Bettye Jane Groening. David was laid to rest at Eloise Woods Community Natural Burial Park in Cedar Creek, Texas.

The family of David Richard Groening created this Life Tributes page to make it easy to share your memories.

David Richard Groening, a longtime resident of Round Rock Texas,...