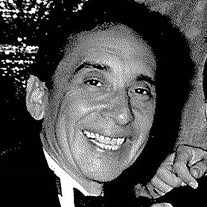 David Gregory Garcia was a lifelong resident and booster of El Paso, TX. He was born on December 17, 1953, arriving home in an ambulance because it was snowing, and the streets were impassable. A student at St. Patrick's Elementary School and Jesuit High School, Dave maintained friendships from that time as he added a world of friends from broadcasting, polo, business, and church where he and his wife Ericka were so involved. Messages have come in from colleagues that Dave mentored and supported. Many commented on the enormous contribution he had made to their lives and early careers. Dave was smart, funny, and big-hearted - although, in the end, it was his heart that did him in. It seemed that Dave enjoyed everything and was always willing to engage in any outing - whether an adventure or a trip to the grocery store. He sought joy in everything he did. Hanging out with Dave was always sure to be a good time, filled with laughter, ridiculous asides, running commentary, and the next great idea. In recent months he'd spent a good bit of time in Austin, TX at the home of his mom where they could talk about sports and analyze every player, coach, referee, game, play, and bad call of any sport in season, about to be in season and just post season. It gave him the opportunity to visit with his sister, Del and his nephew Sebastian but most importantly he got to spend more time with his son, Greg. Nothing made him happier than a mid-day coffee break or a run that included Audra and the pups to Jester King or another great spot for a beer. He died while visiting Austin, February 23, 2022. Dave's death leaves an enormous hole in the hearts of everyone that loved him. There will not be another like him to pass this way again. Fair winds and following seas, Davey. A service in his memory will be held Saturday, May 28, 2022, 11:00 am at Church of St Clement, 810 Campbell St., El Paso, TX 79902

David Gregory Garcia was a lifelong resident and booster of El Paso, TX. He was born on December 17, 1953, arriving home in an ambulance because it was snowing, and the streets were impassable. A student at St. Patrick's Elementary School and... View Obituary & Service Information

The family of David Gregory Garcia created this Life Tributes page to make it easy to share your memories.

David Gregory Garcia was a lifelong resident and booster of El...