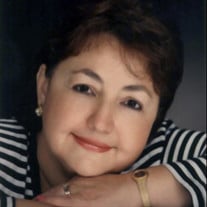 Cornelia (Connie) Levy was born in Matamoros, Mexico. She attended St. Augustine High School in Laredo, Texas, where she graduated salutatorian in 1958. In 1961, Connie received a bachelor’s degree in English and Literature from Texas Women’s University. She then earned a master’s degree in English and Speech at Texas A&I in 1966. After graduating with honors, Connie moved to Corpus Christi. While attending an evening of international folk dancing, she met her husband-to-be, Dr. Leon Levy, a research chemist from New York who had also recently moved to Corpus Christi. They married on February 17, 1968. Connie’s teaching career spanned 37 years, most of which were spent in Corpus Christi, first at Incarnate Word Academy and then at Mary Carroll High School where she taught English and Creative Writing for 14 years. While at Carroll, she also coached Academic Decathlon and produced the school’s illustrious Creative Writing Magazine which received awards from the High School Press Association and the National Council of Teachers of English. In 1991, Connie was selected as Outstanding Humanities Teacher by the Texas Committee for the Humanities. That same year, she was honored as a Distinguished Teacher by the Corpus Christi Caller Times. In 1995, she was named Most Influential Teacher by Texas Scholar Seniors. These were only some of the accolades marking her distinguished career as an educator. A ballet dancer as a young girl and the daughter of an opera singer, Connie always had a passion for the stage. While in college, she fell in love with theater and would go on to spend much of her life pursuing that love as an actress, director, choreographer and playwright. Over the years, she acted in numerous productions at Corpus Christi’s Ritz Theater and Harbor Playhouse. Connie’s final stage performances came in 1997, earning her that year’s Harbor Playhouse Sammy Awards for Best Actress, Best Supporting Actress and Best Cameo Actress in three different productions. After retiring from teaching, Connie spent four years leading a monthly creative writing group for adults, publishing a Writers Circle magazine each of those years. She and her husband then moved to Austin where Connie turned her attention to writing a book. In 2013, her manuscript won the Historical Fiction Manuscript Contest at that year’s Writers’ League of Texas Agents and Editors Conference. Three years later, that manuscript would be published as a novel – PUERTO BAGDAD: SHIPWRECKED DREAMS. This was the culmination of a decade’s work and was a dream-come-true for Connie. Connie’s life was filled with love – for her husband of 42 years, her family, her students and her friends, with whom she could often be seen sharing a meal at her beloved Waterloo Ice House, where she was a near-permanent fixture in recent years. Connie died in Austin of complications from Covid-19. She was preceded in death by her husband, Leon, her two sisters, Genoveva Edmonia (Roberto) Montes and Crisanta Garcia, and her niece, Elisa Garcia. She is survived by two children, Dr. Elizabeth (Aqueel Darbar) Levy and Joseph (Lisa) Levy, three grandchildren, Aaron, Sarah and Sammy, and generations of students on whose lives she made an indelible impression. In lieu of flowers, donations can be made to the Alzheimer’s Association. Funeral for Cornelia Yvonne Levy When: Monday, Nov 16, 2020 12:00 PM Pacific Time/2:00pm Central Time (US and Canada) Register in advance for this meeting: https://us02web.zoom.us/meeting/register/tZMod-iqpzwrGNAOZ_RQPmygMFnQRGJPsIfj After registering, you will receive a confirmation email containing information about joining the meeting.

Cornelia (Connie) Levy was born in Matamoros, Mexico. She attended St. Augustine High School in Laredo, Texas, where she graduated salutatorian in 1958. In 1961, Connie received a bachelor&#8217;s degree in English and Literature from Texas... View Obituary & Service Information

The family of Cornelia Yvonne Levy created this Life Tributes page to make it easy to share your memories.

Cornelia (Connie) Levy was born in Matamoros, Mexico. She attended...