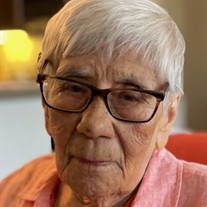 Consuelo Howell, a woman of feisty endurance and strong opinions, was known by many names: Connie, Tia Chelo, Consuelito, Mamacita, Nana, passed away on July 4th, 2021 in Austin, Texas. She was 94. Born Consuelo Mendoza in 1927 in Las Piedras, Mexico, Consuelo was the oldest of eight children born to Lino Mendoza Aguilar and Maria Ambriz de Mendoza. She met and married U.S. Army soldier Paul Howell of Live Oak, Florida, in 1960 and began a new life as a military wife in Ft Bliss, Texas. She had one daughter, Lynne, and three sons, Mark, David, and John, in ?ve years and began her greatest role: mother. Her greatest joy was cooking and feeding those she loved and barely knew. She loved tamales and pinto beans, as well as grits and fried ?sh. She was passionate about sewing and made lots of her own and daughter's clothing. After her home cleared of children Consuelo went to work cooking lunch and snacks for a church daycare, then onto an elementary school cafeteria where she was known for her bread and baked goods. She moved to Austin in 2012 to be closer to her son, David Howell, his wife Grace, and grandson Nathan. Living in a condo in North Austin, she built a new community of beloved friends and neighbors. An independent and stubborn woman who only wanted to live by herself, she was forced to live with a series of people after she broke her hip in April 2020. She hated leaving the condo and being bossed around by others, particularly her daughter. She was preceded in death by her husband Paul in 1998. Consuelo is survived by her children Lynne and Bruce Whitaker, Mark Howell and Marcie Land, David and Grace Howell, all of Austin, and John Howell of Seattle, WA. She left three grandchildren: Ella and Henry Whitaker, and Nathan Howell. She is also survived by her sister Gudelia Halsted of Round Rock, TX. Consuelo developed a special bond with her nieces, Dr. Maria Halsted, Agnes Scott (Rph) and Yolanda Mendoza for their companionship and help in navigating her elder care. Her neighbors Garnett, Tom, Gloria, Irma, and Angelina contributed to her well-being with their friendships and life-saving acts of goodness. Her willful presence will never leave her children. A Service will be held at a later date. For information, please contact Mark Howell at 207-720-0572 or [email protected]

Consuelo Howell, a woman of feisty endurance and strong opinions, was known by many names: Connie, Tia Chelo, Consuelito, Mamacita, Nana, passed away on July 4th, 2021 in Austin, Texas. She was 94. Born Consuelo Mendoza in 1927 in Las Piedras,... View Obituary & Service Information

The family of Consuelo Howell created this Life Tributes page to make it easy to share your memories.

Consuelo Howell, a woman of feisty endurance and strong opinions,...