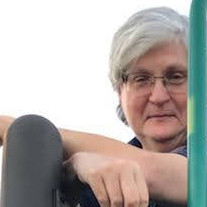 Carole/Shadow partner, wife, best friend, trivia queen, storm anchor, cancer conqueror, world builder, filk composer, Broadway encyclopedia Carole Sue "Shadow" Simon died unexpectedly on the evening of July 14, 2021, due to complications from her successful fight against breast cancer. She was 57 years young. Shadow was diagnosed with breast cancer in November 2020 and would have received her final chemotherapy treatment the day following her death. Carole was adopted at birth on August 15, 1963, by Arthur and Wilma (Warnick) Simon. She is preceded in death by both parents and Aunt Harriet Warnick, and survived by her wife, Jennifer Schmidt, and a plethora of friends and extended relations. Carole graduated from Sharpstown High School in the top 10% of her class and attended University of Texas, working towards a Liberal Arts degree. Her younger years were filled with drama--Theater Under the Stars youth programs, teen theater productions at the Evelyn Rubenstein Jewish Community Center, high school drama classes, and dance classes. In later years, she took that creativity and love of acting into table-top and online RPG games and expanded it into creating worlds and running them for her friends. If you asked Shadow, she met Jennifer at the Texas Renaissance Festival in 1997. Jennifer met too many people that day and remembers meeting Shadow at a mutual friend's house for game night a few years later. They were joined at the hip beginning in May 2002, and after 16 years together (and Shadow patiently waiting for Jennifer to be ready again for the "M" word), Shadow and Jennifer married on May 25, 2018. Even when feeling abysmal, Shadow did her best to make everyone around her smile and laugh. Her sense of humor ranged from sophisticated to sneaky. She enjoyed good conversations with friends accompanied by the inevitable glass of iced tea--no sugar, no lemon. Shadow loved music from the Rat Pack, Judy, Liza, Broadway, and rock'n'roll from the 70s and 80s. Her television shows of choice were true crime TV, crime procedurals, superheroes, and science fiction. She loved to solve a mystery. When she wasn't listening to recorded classic novels, she was reading lesbian fan fiction. "No one is actually dead until the ripples they cause in the world die away." ~Terry Pratchett "Death is not extinguishing the light; it is only putting out the lamp because the dawn has come." ~Rabindranath Tagore A virtual memorial service will be held Saturday, July 31, at 5 p.m. Central. Details and the Zoom link can be found at https://www.gatheringus.com/memorial/carole-sue-shadow-simon/7714. In lieu of flowers, please make donations in Shadow/Carole's memory to Friends for Life Animal Shelter (https://friends4life.org/donate/).

The family of Carole Sue Simon created this Life Tributes page to make it easy to share your memories.