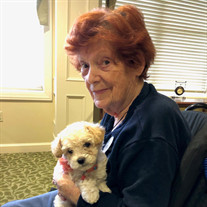 Carlyn Deitz, age 93, passed away peacefully in Austin, Texas on January 15, 2021 with her family by her side. Carlyn was born in Bensonhurst, Brooklyn to immigrants, Harry and Gussie Axelrad – Harry, a restauranteur and night club owner; Gussie a homemaker. Carlyn’s older sisters, Janet and Helen, have both predeceased her. As a youth, Carlyn had a real talent for drawing. She attended Art School after high school, but rather than establish a career, married Paul Deitz and settled in North Jersey, raising three sons, Michael, Jeffrey, and Harry. Paul sold his interest in his family business, retired, and in 1971 he, Carlyn and Harry moved to Florida. Paul bought a boat, but did not stay retired for long, becoming a commercial realtor. Carlyn became a travel agent which allowed Paul and her to indulge themselves, travelling around the world to places that many of us would probably have difficulty spelling. Her international travel was curtailed by Paul’s passing in 1994. Carlyn Deitz had a good life. She survived a terrible burn incurred in her late 20’s which required multiple surgeries and grafts. She survived thyroid cancer in her 40’s, lymphoma in her 70’s, as well as a broken hip. Nothing held her down for very long. She was a happy person who enjoyed talking and telling stories. She could knit, but boy, could she spin a yarn. She was an excellent cook and somewhat regular synagogue attendee. She loved her six grandchildren. She was born a brunette, but lived life as a redhead to the very end. Carlyn was spunky and not afraid to speak her mind. As a close family friend once said of her, “Carlyn is a real goddammit.” We never quite understood why he said that, but knew what he meant; and we and everyone who met her loved Carlyn Deitz.

Carlyn Deitz, age 93, passed away peacefully in Austin, Texas on January 15, 2021 with her family by her side. Carlyn was born in Bensonhurst, Brooklyn to immigrants, Harry and Gussie Axelrad &#8211; Harry, a restauranteur and night club owner;... View Obituary & Service Information

The family of Carlyn Deitz created this Life Tributes page to make it easy to share your memories.