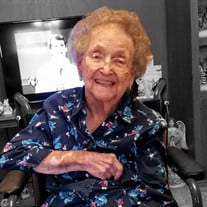 Billie Jean Loftis was born in Houston, Texas on February 18, 1929 to Clarence J. Johnson, Sr. and Fannie Bell Powell Johnson. She passed away peacefully on the morning of October 28, 2020 at the age of 91. She was the youngest of 6 children... View Obituary & Service Information

The family of Billie Jean Loftis created this Life Tributes page to make it easy to share your memories.

Billie Jean Loftis was born in Houston, Texas on February 18,...