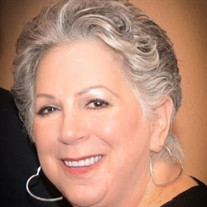 Betsy M. Nozick June 10, 1944 - July 18, 2018 There was no one in this world quite like Betsy Marilyn Nozick. The wife, mother, grandmother and great-grandmother left this world on July 18, 2018, to meet her late daughter Marci. Together with her husband Robert, Betsy owned Gourmet Gals & Guys, a premier catering service, until she retired in 1992. During their “crazy catering days,” they served dignitaries including President Gerald Ford, Israeli Prime Minister Benjamin Netanyahu, and Governors Mark White, Ann Richards and Bill Clements. They also served royalty, including Prince Charles and the Prince of Kent. After retiring from the catering business, Betsy and her partner Tricia Henry wrote a charming cookbook called Texas Tuxedos to Tacos, recalling some of the most interesting Gourmet Gals & Guys culinary moments and sharing their iconic recipes. Betsy also wrote Grandma & Me & Her Secret Recipe, a precious book about her cherished tradition of making pancakes for her grandchildren. Despite her notable catering career, Betsy’s proudest achievement was her family. She loved shopping and seeing movies with her late daughter Marci Santiago, running errands and getting pedicures with her daughter Robin, and - most of all - giving Robert, her husband of 55 years, a long honey-do list. Betsy was preceded in death by her parents Ros and Ralph Novin and her youngest daughter Marci Santiago. She is survived by her husband Robert, daughter Robin Krumme and husband Gregg, her son-in-love Hector Santiago and wife Melissa, her grandchildren Taryn and husband Evan, Zach, Kyle and Kendall, and her great grandson Maddox. She is also survived by her brother Harold Novin and wife Lorraine, as well as nieces Lisa Harris and Melyssa Nozick, who loved her like another mother. The family will hold a memorial service in the coming weeks. In lieu of flowers, donations can be made to National Ovarian Cancer Coalition at ovarian.org.

Betsy M. Nozick June 10, 1944 - July 18, 2018 There was no one in this world quite like Betsy Marilyn Nozick. The wife, mother, grandmother and great-grandmother left this world on July 18, 2018, to meet her late daughter Marci. Together... View Obituary & Service Information

The family of Betsy Marilyn Nozick created this Life Tributes page to make it easy to share your memories.