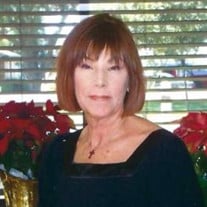 On Saturday, August 7, 2021, Barbara Lynn Astrich passed away at the age of 74 after a long illness. It would be wrong to say that Barbara lost her battle because she stopped fighting. She truly knew resilience and perseverance and was determined to the end. That’s the way she lived her life. She was our butterfly. So beautiful and sweet now free and at peace. Although she was a New York City gal, Barbara’s passion was her country life, her horses and her many dogs, cats and birds. If there was a stray dog or cat on the road in the car it went to her home to be cared for. She married the love of her life, Robert on August 13th, 1977. It would have been their 44th wedding anniversary. They lived in Houston with Fonda and Craig until 1986. They moved to Monaville where Barbara could spend her days tending to her horses and beautiful garden. Their ranch gave her peace and purpose. She was an equestrian rider and competed in many dressage competitions. Barbara is survived by her stepchildren, Fonda and husband, Wayne Arzt, Craig Astrich and Laura Astrich and grandchildren, Ian, Raya and Zane. Sisters, Teri Paris and Eileen, husband Alan Manack. Brother In-law, Eddie Astrich and wife, Joan Edelstein. Along with her nieces and nephews, Jason Manack (Kai and Kali); Jenice Manack Clarke and husband Aaron (Mya and Henry); Aubrey Manack Adams and husband Glenn (William and Adelyn). She is preceded in death by her husband, Robert ‘Bob’ Astrich; Mother, Violet Goodwin; and Father, Phillip Goodwin. In lieu of flowers, donations can be made to the Houston SPCA or to Reining Strength Therapeutic Horsemanship in her memory. A live stream of the funeral service will appear on the Austin Natural Funerals Facebook page, https://www.facebook.com/AustinNaturalFunerals, shortly before 10 am on Friday, August 13th. A Facebook account is not required in order to watch. If a pop-up window appears asking you to log in click "not now" and the live stream will be available for you to watch. If the "not now" button does not appear, scroll down on the page and it will come up for you to select.

On Saturday, August 7, 2021, Barbara Lynn Astrich passed away at the age of 74 after a long illness. It would be wrong to say that Barbara lost her battle because she stopped fighting. She truly knew resilience and perseverance and was determined... View Obituary & Service Information

The family of Barbara Lynn Astrich created this Life Tributes page to make it easy to share your memories.