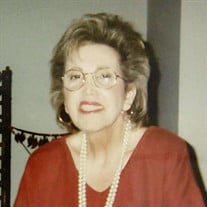 Arlene Lyons Lockshin was born on April 8, 1933 in Great Neck, New York. In the 1950’s Arlene moved to Houston, where she was reacquainted with Allen Lockshin, whom she first met in college. Allen and Arlene were married on Feb. 1, 1958. Allen’s work took them to Akron, OH, then back to Houston in 1968. In Houston they settled and raised their daughters, Jody and Kay. They were long-time members of Temple Emanu El. In 2012 Arlene and Allen relocated to Austin to be with their daughters and son-in-Law, Rod Schnuriger, and enjoyed their new life close to their daughters. Arlene was preceded in death by Allen in 2015. Arlene made friends of all ages everywhere she went and especially enjoyed the friends she made at the Atria. Arlene took advantage of many activities, including the Austin Symphony, which delighted her immensely and she also enjoyed participating in Power for Parkinson’s exercise classes and activities. Having a strong work ethic, Arlene was in retail sales most of her life and mostly at Neiman Marcus; she loved her job, co-workers and customers. She also volunteered at M.D. Anderson in Houston, where she took young Jody and Kay to help on holidays. Loyal, humorous, devoted, strong willed, stylish, poised, charming, funny, vivacious, a great mother, wife, friend and confidante describe Arlene, who will be missed by her family and friends. A “giver” until the end, Arlene donated her body to the UT Health Science Center in Houston. Special thanks to caregivers, Sylvia Salinas and Mariza Sanchez, for taking such good care of Arlene throughout the last few years. In lieu of flowers, please consider donating to Power for Parkinson’s https://www.powerforparkinsons.org/ or MD Anderson Cancer Center https://www.mdanderson.org/ or a charity of your choice. A memorial service will be held at 1pm on Monday, May 14 at Temple Beth Shalom, 7300 Hart Ln, Austin, TX. Reception following. Wear bright colors, as Arlene would have wished!

Arlene Lyons Lockshin was born on April 8, 1933 in Great Neck, New York. In the 1950&#8217;s Arlene moved to Houston, where she was reacquainted with Allen Lockshin, whom she first met in college. Allen and Arlene were married on Feb. 1, 1958.... View Obituary & Service Information

The family of Arlene Lyons Lockshin created this Life Tributes page to make it easy to share your memories.