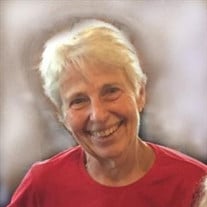 Ann Hopkins Cohen took giant strides through life, gifted with an indelible resolve that belied her modest stature. Life took her from the Midwest to New York City, from farms to academia, and travels the world over. Her journey ended abruptly on July 15th, 2021 when Ann passed away in her sleep at her home in Austin, Texas at the age of 76. She was born Ann Stephenson Hopkins in Granite City, Illinois to Leonard and Mary Hopkins in the early hours of July 17th, 1944. Her passions for sports cars and Weimaraner dogs were instilled early on, along with an insatiable desire to learn. Those never abandoned her. Her first foray away from home led to a degree at the University of Illinois, her marriage to Bill Elder, and a career in Political Science. Her graduate studies at the University of Minnesota coincided with the arrival of her son, and a lifelong love for (and frustration with) the Minnesota Vikings. The accomplishments in Ann’s life were substantial. She began teaching at Illinois State University and completed her Ph.D amidst parenthood, 180 mile daily commutes, and daily life on a working farm. Subsequent teaching positions at Hunter College in New York were followed by advances into administration at Hunter and Queens College. At each stage of her career, Ann forged friendships that meant so much to her, and lasted until her death. Ann married Ira Cohen in 1989, and their shared passion for teaching and travel defined their life together over three decades. Ann’s conversion to Judaism and their move to New York City deepened the foundation of their love and happiness, and they embraced their communities with both arms. Ann and Ira moved to Austin to share their final chapter close to family. As the ravages of Alzheimer’s Disease took its toll on Ira, Ann devoted herself tirelessly to his care until his passing on April 29, 2020. The two are now buried together in Eloise Woods outside Austin. Her brothers, David and Tom, preceded her in death. Ann is missed dearly by her children: son Andrew Elder (m. Rachel) of Austin, stepchildren Peter Cohen (m. Julie) of St. Louis, Heather Cohen of Denver, and Neal (m. Anne) of Cedar Park. Ann took great joy in her grandchildren – Anwen, Madoc and Bevan Elder (Austin), Benjamin, Hannah and Lydia Cohen (St. Louis), and Jacob and Grace Cohen (Cedar Park) – relishing the opportunities to host their visits. Donations to honor Ann can be made to the American Diabetes Association (https://www.diabetes.org) or Austin Pets Alive (https://www.austinpetsalive.org).

Ann Hopkins Cohen took giant strides through life, gifted with an indelible resolve that belied her modest stature. Life took her from the Midwest to New York City, from farms to academia, and travels the world over. Her journey ended abruptly... View Obituary & Service Information

The family of Ann Hopkins Cohen created this Life Tributes page to make it easy to share your memories.