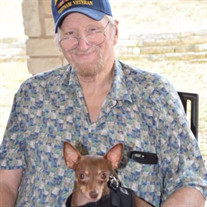 Allan (Al) Dale Calvery was born in Cleburne, Texas on June 14, 1949 to Margaret North and Gene Calvery and died September 25, 2021. He is survived by his wife of 37 years, Carol and furbabies Milo, Sir Renity, Hissy Fit, Monet, Coco, Patchouli, Ziggy and Zelda. He is also survived by his sister, Carolyn Gifford Barnett of Paris, Texas, nieces and nephews with their spouses and a lot of wonderful great nieces and nephews. As well as his sister-in-law Sandy Sheffler, brother-in-law Richard Sheffler ( and Susie) He also had many friends who loved him like family and were very much involved in his daily life, especially Carla Renwick Pearson who was like a daughter to him. Al was an air force veteran from 1967 to 1971 who served time in Vietnam, where he was exposed to Agent Orange which later was the cause of his disability. In his life, he was an entrepreneur who also worked in HVAC and plumbing but was also very handy and loved tinkering and working on different projects. He could fix anything. Al taught several years of trade school and would help anyone who needed it. One of his absolute favorite places to be laying on a hammock on Lake Travis’ Hippie Hollow – so much so that he obtained the nickname “Waffle Butt” and they even named a section of the park after him, known to those who regularly went there. One of the unfortunate side effects of the exposure to Agent Orange was that it affected his circulation and he had to have one of his legs removed in 2012, shortly after he and Carol were displaced from the Bastrop Fire. However, his sense of humor was always admirable, and he had no qualms about making fun of himself. This led to a vast collection of amputee joke t-shirts which he later became known for wearing. Such shirts that said, “It’s official, I am on my last leg” or “I was going to make an amputee joke, but I’m stumped”. Al will surely be missed by all who knew him. He gave the most wonderful hugs. Despite his positivity and charming charisma, Al was tired and in a lot of pain and while his absence is already felt by those left behind, we can be at peace knowing he is no longer suffering. May his memory always be a blessing to all who knew him.

The family of Allan Dale Calvery created this Life Tributes page to make it easy to share your memories.