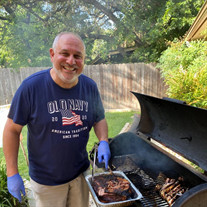 Alan Isaacson, 62, of Austin, TX died Monday, August 3, 2020 after three weeks bravely battling the Coronavirus. Alan was born on January 31, 1958 in Jacksonville, FL to Seymour Ronald (Ronnie) Isaacson and Jeanne Lippman Isaacson. Shortly after his birth the family moved to Dallas, TX where Alan grew up with his younger sister, Nancy Isaacson-Tobin. Alan spent his happy youth in the Dallas area attending school, playing soccer, basketball, and golf and working part time jobs to pay for his fun and games. He attended The University of Texas, Austin and received his Master of Science in Social Work (MSSW). While attending UT he met Cindy Boerner, the girl next door with the beautiful long blonde hair. Alan and Cindy, the love of his life, were married June 26,1982 in San Antonio, TX. For 38 years Alan put his MSSW to work, helping people in need primarily in mental health and rehabilitation. Alan’s first job after college was as a psychotherapist at The Family Guidance Center (Dallas). Alan’s skills and reputation brought him many opportunities including Director of Public Relations at the Brown Schools (Austin), Director of Meadowbrook, a head trauma facility where he built the program and led the staff with his teammate Duane Harris (Tulsa), Program Director for PIA (Boulder), Director of Meadowbrook (Atlanta), Multi-Facility Administrator for Relife/HealthSouth (Nashville), and Regional/Divisional Director of HCR/Manor Care with weekly travel to Toledo after moving back to Austin. Alan and his family were glad to be back in Austin. It was in Alan’s next role as VP/COO of Seton Shoal Creek Hospital where he felt the greatest satisfaction, working alongside the Daughters of Charity, dedicated to the Mission of Service for eight years. After leaving Seton he served as a Superintendent of the Austin State Hospital. His most recent work was the Director of the Palestine Behavioral Health Hospital, Palestine, TX, traveling weekly from Austin. Alan was committed to serving others, especially those with mental illness and those with no advocate. He loved helping bring out the best in everyone always willing to give a hand up instead of a handout. He demanded the highest level of service, care, and professionalism from himself and those that worked with him. In leadership roles Alan would say, “people either really like me or they really dislike me.” He often corrected staff and said, “you don’t work for me; you work for yourself, but you work with me.” He pushed people “to do their best” and to follow through with commitments, all the while expecting nothing but the best from himself. Alan was authentic, often speaking his mind about things the way they were. But, he was also kindhearted and generous beyond measure and had a playful nature to him with people he loved. He was the ultimate host of food and beverage. You never left our home after coming for a meal without taking home a goodie bag. “Too much is just enough” was his proudly spoken motto. Some family members referred to him as “Mr. Overserve.” He was a man of sacrifice, doing anything and everything for his family. He was a wonderful provider. He had a special relationship with each of his children. He adored them. His favorite week-end past time was spending time with his family. He loved and cherished his sister Nancy. Alan was preceded in death by his mother, Jeanne Isaacson who loved unconditionally and taught Alan to “do your best” with all aspects of his life. Alan is survived by his father, Ronnie Isaacson, his wife, Cindy Isaacson, children, Kathryn Isaacson (31) and Jacob Isaacson (28) both of Austin, TX, sister Nancy Isaacson-Tobin and husband Chuck Tobin of Fairfax Station, VA and their two sons, Sam Tobin of Fairfax Station, VA and Ben Tobin of Louisville, KY. The family offers a heartfelt thank you to the Palestine Regional Regional Medical Center, especially Dr Brandy Ricard head of the ICU and her professionally trained and compassionate staff for the care they provided Alan for two weeks while he was in the hospital. Thank you also to Amy, Lisa, Jana and all others that sent love and support from the Palestine Behavioral Health Hospital. Alan’s wife, Cindy would like to express thanks to their extended family, friends, and multiple communities around the globe that prayed and held the light during this time while not being able to sit by Alan’s side. In lieu of flowers donations can be made to Ending Community Homelessness Coalition (ECHO) where Alan served five years on the Board of Directors , https://www.austinecho.org/donations/donate-for-alan/ or an organization of your choice. Out of respect for all and in consideration of the Corona virus the burial will be streamed from the following link at 2:00 Friday, August 7th, 2020. www.facebook.com/AustinNaturalFunerals/ Following the service the recording will be viewable here on Alan's Tribute page.

The family of Alan R. Isaacson created this Life Tributes page to make it easy to share your memories.