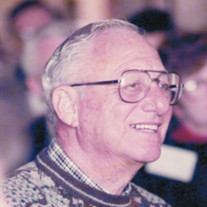 Legend has it that on August 10, 1930, some schnook with really bad judgment stole a pair of shoes from Schechter’s Department Store. Helen Brilling Schechter chased down the thief and rescued the shoes, after which husband Morris drove the thirty miles from Rosenberg to St. Joseph’s Hospital in Houston where she delivered her second son. Though Adolph Saul Schechter was named for his great-grandfather Adolph Emden of Hamburg, events of the 1930s and 1940s made the name “Adolph” unpopular enough that everyone but his immediate family called him “Joe.” One might suppose he didn’t want his mother’s feelings to be hurt, but that name plus the anagram of his initials was enough to get him to legally change his name to A.J. Schechter. The compromise of avoiding hurt feelings while taking care of how he projected himself characterizes the way Joe lived his life. His family will remember him for they way he listened with a keen ear then offered guidance with his powerful moral compass. His grandchildren sometimes joked that they wanted a bracelet with the letters “WWPPD?” What would Pop Pop do? Joe and his brothers grew up in Rosenberg, Texas, and worked at Schechter’s Department Store alongside their parents. During high school, Joe began a lifetime of leadership as student council president and valedictorian of his class. Along with his older brother Robert, he was inspired by his high school chemistry teacher to pursue chemical engineering. He attended and graduated from Texas A & M University class of ‘51, then served in the Army Chemical Corps first at Fort McClellan, Alabama, followed by two years stationed in post-war France. It was during his time in Alabama that Joe met the love of his life, Joyce Greenberg. Jewish mothers in small Alabama towns went to the army base to choose Jewish soldiers to invite home for holidays or Shabbat. Joe’s mother-in-law Rose grabbed him for Rosh Hashanah to introduce to her 15-year old daughter. The two continued to correspond while he was in France, and when Captain Schechter returned to the U.S., he married Joyce in her hometown of Gadsden in 1954. Thirteen months later, (“And don’t think they weren’t counting!”) Cathy was born; Cheryl followed in 1958, and David in 1961. The family lived in Waco for 34 years. After the children launched, Joe and Joyce followed his career to pre-retirement adventures from Moon River in Georgia to the mountains of western Maryland in Cumberland. Joe spent the majority of his career in McGregor, Texas at a chemical plant that would change hands many times. Originally, Phillips Petroleum, then Rocketdyne bought it and put their engineers to work on the production of the liquid and solid to help defend the country and propel astronauts to the moon. As Rocketdyne became North American Aviation, then merged with Rockwell International, Joe fascinated his children with his “top secret clearance.” What did he do all day? By the time that Hercules purchased the plant in 1978, Joe had climbed the corporate ladder until he became plant manager and leader of over 800 local employees. Few corporate executives could mediate between their corporate headquarters and the union, but both sides trusted Joe for his humble leadership, innate sense of fairness, and ability to compromise. As a volunteer, Joe served on the board and as president of Congregation Rodef Shalom in Waco. After his retirement, he and Joyce moved to Austin, where he mentored aspiring entrepreneurs as a SCORE volunteer for the Small Business Administration. He mentored and advocated for troubled youth CASA and served on the board of Austin’s Congregation Beth Israel. He and Joyce also regularly delivered meals to the homebound for Meals on Wheels for many years. Though he accomplished much in the world of business, he accomplished most as devoted husband, loving father, adoring grandfather, and trusted brother. As an uncle he treated his nieces and nephews to all the whimsy he felt they missed in their homes, including food fights and driver’s education; he bailed them out of trouble without tattling. To all of the younger generations, he dished out all kinds of advice, but only when asked. His quick wit, sharp sense of irony and occasional quiet--but wicked-- sense of humor, entertained us all. With his wisdom, clear vision and example of a life well lived, he taught his children, grandchildren, nieces, nephews, and all their friends unforgettable lessons Joe and Joyce traveled the world together and made friends wherever they went. With his profound kindness and humility, Joe attracted friends with his tender and genuine curiosity, tolerance and respect. Even in his final years when his words failed, he met every visitor and caregiver with his luminous smile and expressions of gratitude. He met the challenges of his disability with patience and dignity; when he was able to retrieve his words, he continuously reminded us to share our blessings with others. Joe was deeply loved by Joyce, his wife of 65 years; children Cathy (Eddie Selig); Cheryl (Aryeh Farkas); David (Lucy Schechter); brother and sister, Arthur and Joyce Schechter. Also, adored grandfather of Julia, Molly, Nissim, Raizel, Joshua, Jessica, Abe (Julie), Ellana, Jonathan, and 8-month old Jack Selig. His nieces, nephews and many cousins across the U.S. and in Israel, will miss him, as well as his former co-workers. May his precious soul be bound up in the life of the Eternal. Those of us who were fortunate enough to be touched by his special sweetness will proudly carry forth his love and life lessons to a world in desperate need of the bright light with which he illuminated our world. In lieu of flowers, we request that donations to be made to Hospice Austin, the Aytz Chaim Fund of Congregation Agudas Achim (Austin), CASA, or the charity of your choice.

Legend has it that on August 10, 1930, some schnook with really bad judgment stole a pair of shoes from Schechter&#8217;s Department Store. Helen Brilling Schechter chased down the thief and rescued the shoes, after which husband Morris drove... View Obituary & Service Information

The family of A.J. (Joe) Schechter created this Life Tributes page to make it easy to share your memories.