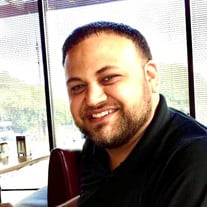 Our world came to an abrupt halt when we found our beloved son, Aaron Colunga, had passed away from injuries in an automobile accident as he was almost home. Aaron Colunga was born on November 1, 1989, in Austin, Texas to proud parents, Andrea Colunga Bussey and Jesse Limon Colunga. To say that Aaron was a ray of sunshine is an understatement. He loved his family and friends, the Jewish faith and all that was good in this world. Aaron could make you laugh spontaneously, and was quick-witted and very smart. He attended the Isely School, where he learned the basics of tennis and fencing. He attended Del Valle schools and lettered four years on the varsity team. He played some baseball and football, but his real love was tennis. He attended the University of Texas and he was an avid Red Sox, a Texas Longhorn and a Dallas Cowboy fan. He was a proud member of the Limon family, and had a countless number of true friends, who will help keep his memory alive. He is survived by his “Pops”, Jesse Limon Colunga, mother, Andrea Colunga Bussey, stepfather Art Bussey, stepbrothers Michael Bussey (Restu), Travis Bussey (Megan), numerous close cousins, nieces and nephews, aunts and uncles. Aaron touched so many lives through his volunteer work at the Austin Moose Lodge, numerous political campaigns and community work. He was preceded in death by his grandparents Julia and Jesse Ybarra Colunga, Florence and Buddy Bloom, aunts Karen Fox and Tina Rivera. Aaron was gregarious, smart, spiritual, and loving. The World has lost the brightest, shining green-eyed star. We will forever remember his infectious smile and laughter, especially when he was teasing or pulling a prank. Shine on our beautiful golden son! May Aaron’s memory be a blessing! Services will be held Thursday morning at 11 o’clock at Congregation Beth Israel, 3901 Shoal Creek Boulevard. Interment will follow at Cook-Walden Memorial Park, 14501 N. IH 35 in Pflugerville. A gathering of friendship will follow at the Austin Moose Lodge 1735, located at 2103 E.M. Franklin Avenue, Austin, Texas 78723. Sending flowers is not the Jewish custom, therefore a Go Fund Me account has been set up to honor Aaron’s memory! https://www.gofundme.com/f/in-loving-memory-of-aaron-colunga?utm_source=customer&utm_medium=copy_link-tip&utm_campaign=p_cp+share-sheet

Our world came to an abrupt halt when we found our beloved son, Aaron Colunga, had passed away from injuries in an automobile accident as he was almost home. Aaron Colunga was born on November 1, 1989, in Austin, Texas to proud parents, Andrea... View Obituary & Service Information

The family of Aaron Jacob Colunga created this Life Tributes page to make it easy to share your memories.

Our world came to an abrupt halt when we found our beloved son,...