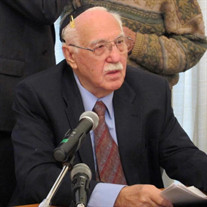 Professor Aaron Bar-Adon, beloved husband, father, and “saba” (grandfather), veteran of Israel’s War of Independence, Professor Emeritus at the University of Texas at Austin, and member of the Academy of the Hebrew Language died on December 16 at the age of 98, surrounded by loved ones. Professor Bar-Adon was born on March 3, 1923, in Kolno, Poland. He made aliyah to the Land of Israel (then still under the British Mandate) with his parents and an older sister at the age of 10, following his older siblings. He became a member of Israel’s Haganah as a teenager and went on to serve in Israel’s 1948 War of Independence and 1956 War. He married his wife Zipporah in 1946 at the home of Rabbi Yehoshua Kaniel, the Chief Rabbi of Haifa and they had three children, Tamar, Rama, and Eshel. He studied at Yeshivat Tel Aviv and worked to put himself through school, including as a silversmith. He graduated first in his high school class and won a fellowship to the Hebrew University of Jerusalem, where he earned his M.A. in 1949, studying Hebrew and Arabic Language and Literature, Linguistics, Philosophy, and Islamic Culture. He became fluent in numerous languages including Hebrew, English, Arabic, Yiddish, and Aramaic, among others. Bar-Adon went on to earn his Ph.D. in Linguistics from the Hebrew University in 1959 and was awarded the university’s Habergrutz Prize for the best dissertation and Warburg Prize for excellence in research. In 1959, he was recruited to teach Hebrew and Linguistics at the University of Wisconsin, Madison. From 1960-1963, he was an Assistant Professor and led the Hebrew Studies program at Wayne State University in Detroit, MI. He joined the faculty of the University of Texas at Austin in 1963, where he founded and led the Hebrew Studies program, and was promoted to full professor in 1966. He grew the program to hundreds of students during his time leading it. He taught at UT for 50 years, taking emeritus status in 2013 at the age of 90. He also served as a Visiting Professor at the Hebrew University. Over the course of his career, he wrote more than 10 books and monographs and authored over 60 articles. He interviewed some of the most important figures in Israeli history on language, including Israel’s first Prime Minister David-Ben Gurion and its Nobel Laureate in Literature S.Y. Agnon. He received fellowships from American Council of Learned Societies and the Rockefeller Foundation, the latter of which informed him that he was its only recipient between Chicago and Berkeley at the time. In 2011, he was elected to the Academy of the Hebrew Language, the world’s leading institution for the Hebrew language. In 2014, the Council for Hebrew Language and Culture in North America awarded him its lifetime achievement award. His last scholarly project was focusing on developing his theory of the proper vocalization of Hebrew language, including the reading of the Bible, calling it the “Art of Biblical poetry and its inner music.” He gave a keynote address on this subject at the Academy of the Hebrew Language’s plenary session in 2011. He is remembered for his exceptional love, devotion, and warmth to his family and friends. He visited his wife Zipporah in the hospital every day during the last year of her life. He befriended people from all walks of life, from eminences such as his close friend the late Israeli President Yitzhak Navon and distinguished scholars, his fellow synagogue congregants, to restaurant staff and university custodians. He was widely acclaimed for his teaching and drew students from diverse backgrounds to his courses in Hebrew and Judaic Studies. His 2004 post-tenure review concluded “this teacher is masterly,” noting that his teaching evaluations were filled with “page after page of panegyric” including comments that “taking a class from Prof. Bar-Adon is like discovering a cave full of treasure at Qumran” and “he embodies all that is best about university teaching.” He was a member of Congregation Agudas Achim in Austin, TX and also frequently attended Chabad of Austin. He was preceded in death by his beloved wife of nearly 75 years Zipporah Bar-Adon; his parents Shmuel and Esther Bar-Adon; his brothers Avraham Bar-Adon, Pessah Bar-Adon, Tzvi Bar-Adon, and his sisters Sarka Koffler and Rachela Bavli. He is survived by his children Tamar Magid, Rama Bar-Adon, and Eshel Bar-Adon; grandchildren Amy Payne (Greg), Ari Wisch, Jordan Bar-Adon, and Shana Bar-Adon; and his great-grandchild Brandon Payne, all of whom loved and adored him.

Professor Aaron Bar-Adon, beloved husband, father, and &#8220;saba&#8221; (grandfather), veteran of Israel&#8217;s War of Independence, Professor Emeritus at the University of Texas at Austin, and member of the Academy of the Hebrew Language... View Obituary & Service Information

The family of Aaron Bar-Adon created this Life Tributes page to make it easy to share your memories.